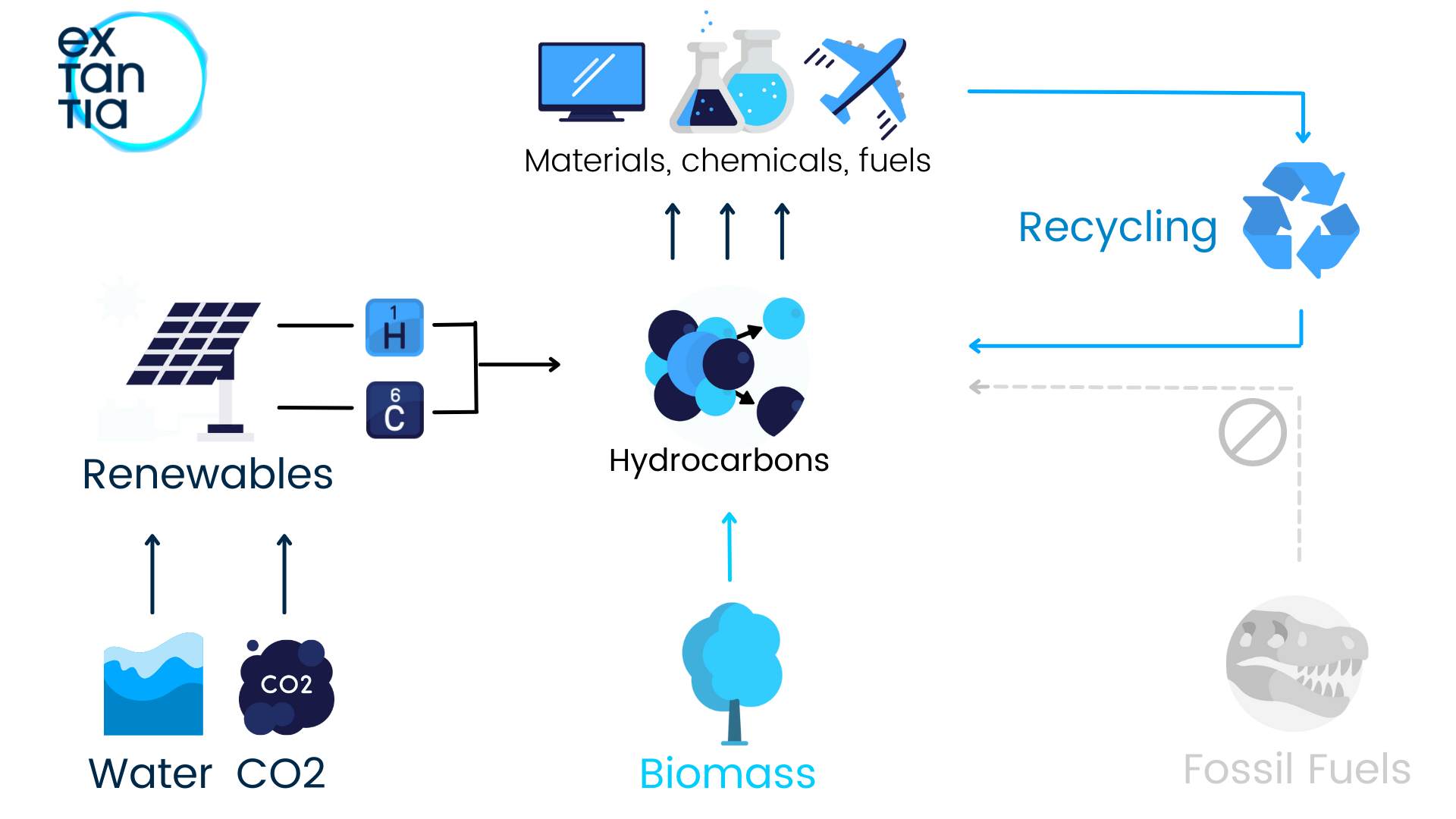 Hydrocarbons power and shape our society. Everything we use today – ranging from gas to oil to plastics – consists of hydrocarbons. It’s our main source of energy and building blocks for many materials. Hydrocarbons, simply put, are molecules that are made up of hydrogen and carbon atoms. In nature, they mostly originate from fossil resources.

This means for us to decarbonize and remove our full dependency on fossil fuels, we will have to find ways to replace hydrocarbons.

Electrification won’t work for everything

Among the largest movements in the climate industry today is the “Electrify Everything” movement. This movement’s goal is to replace fossil fuels and consequently hydrocarbons by electrifying everything from our homes to airplanes.

Electrification is necessary to decarbonize most industries and systems that still rely on fossil fuels. Producing heat by powering a heat pump or storing energy in a wheel are all perfect applications for the electrification movement to push on forward.

However, electrifying everything isn’t feasible. For example, we may be able to electrify short-range air travel, but for long-distance air travel, we need to lean on hydrogen (which is not going to be ready any time soon) or a cleaner fuel source.

What this demonstrates is that we don’t and can’t remove hydrocarbons entirely from society. Instead, we need to find clean and renewable sources to harvest hydrocarbons from sources that are not fossil. So what are the options we have?

Biomass contains stored chemical energy from the sun. Through the process of photosynthesis, plants produce biomass. By burning that biomass, you can generate heat. In addition, you can convert it to renewable liquid and gaseous fuels through various processes.

Biomass is organic material that comes from living organisms, such as plants and animals. It was the largest source of total annual U.S. energy consumption until about 1850 and remains an important fuel in many countries today, particularly those that are less developed where cooking and heating still largely depends on it.

A reemergence of biomass would become a great source of hydrocarbons in our society. That said, we need to make sure biomass is sourced in a sustainable manner. For example, by valorising waste from food production.

At Extantia we invested in Bloom Biorenewables that uses biomass waste to produce clean molecules for the petrochemical industry. You can read more about it in our piece here.

What if you could create Hydrocarbons by combining the atoms it contains? This is indeed possible if you have sustainable hydrogen and captured carbon from a renewable pool, like from the air.

Green hydrogen is mainly created by using renewable energy to power an electrolyzer that splits hydrogen from water molecules. The produced hydrogen can be used directly to generate power and heat using a fuel cell. In combination with carbon, it makes hydrocarbons.

Scaling green hydrogen is mainly a question of cost. Therefore, we invested in H2Pro that develops a new type of electrolyzer. It eliminates the need to use a membrane, the most expensive and sensitive element in the system. It thereby paves the way for simple-to-produce and cheap hydrogen. You can read more about it here.

There are two main ways to capture the carbon we need. The first is Direct Air Capture (DAC). DAC has rightfully earned a place as one of the foremost carbon removal techniques on the planet. The ability to capture and process carbon on a scale that no other technology can match has encouraged speculation that DAC technologies can be deployed and commercialized to curb global warming.

Pioneer DAC corporations like Climeworks, Global Thermostat, and Carbon Engineering have successfully launched or are about to launch full-scale operations that capture a few thousand tons of CO2 yearly.

Another way is to capture carbon even before it is emitted into the air. Directly at the source of origin. This is called “point capture” and usually involves placing a filter on the exhaust channel of production facilities.

The last bit of the chain is to connect the carbon and hydrogen to generate hydrocarbons. Chemical reactors use high pressure and elevated temperature in the presence of a catalyst.

As startups begin to form and grow with the focus on addressing the critical challenges that are keeping green hydrogen and direct air capture from scale, we’ll likely begin to see the rise of plants that specialize in producing clean hydrocarbons by combining the two together.

Extantia’s portfolio company INERATEC is doing just that. This year they will launch a first plant to produce 4.6 million liters of synthetic hydrocarbons per year. Find more on INERATEC on our blog.

Recycling already utilized hydrocarbons, or repurposing them by finding second-life applications, is likely the most scalable option today to reduce the need for fossil fuels. Over the next decade, we expect to see significant improvements in how well we can recover and repurpose hydrocarbons from things like materials and chemicals.

At Extantia – we’re extremely bullish on technologies and solutions that are helping us move away from fossil fuels by accelerating the adoption of any of the above alternatives to fossil fuels. There is no way electrification – with the technology we have today – can remove our dependency on hydrocarbons entirely.

For that reason, we are actively seeking and monitoring startups that are helping us clean up our supply of dirty hydrocarbons.