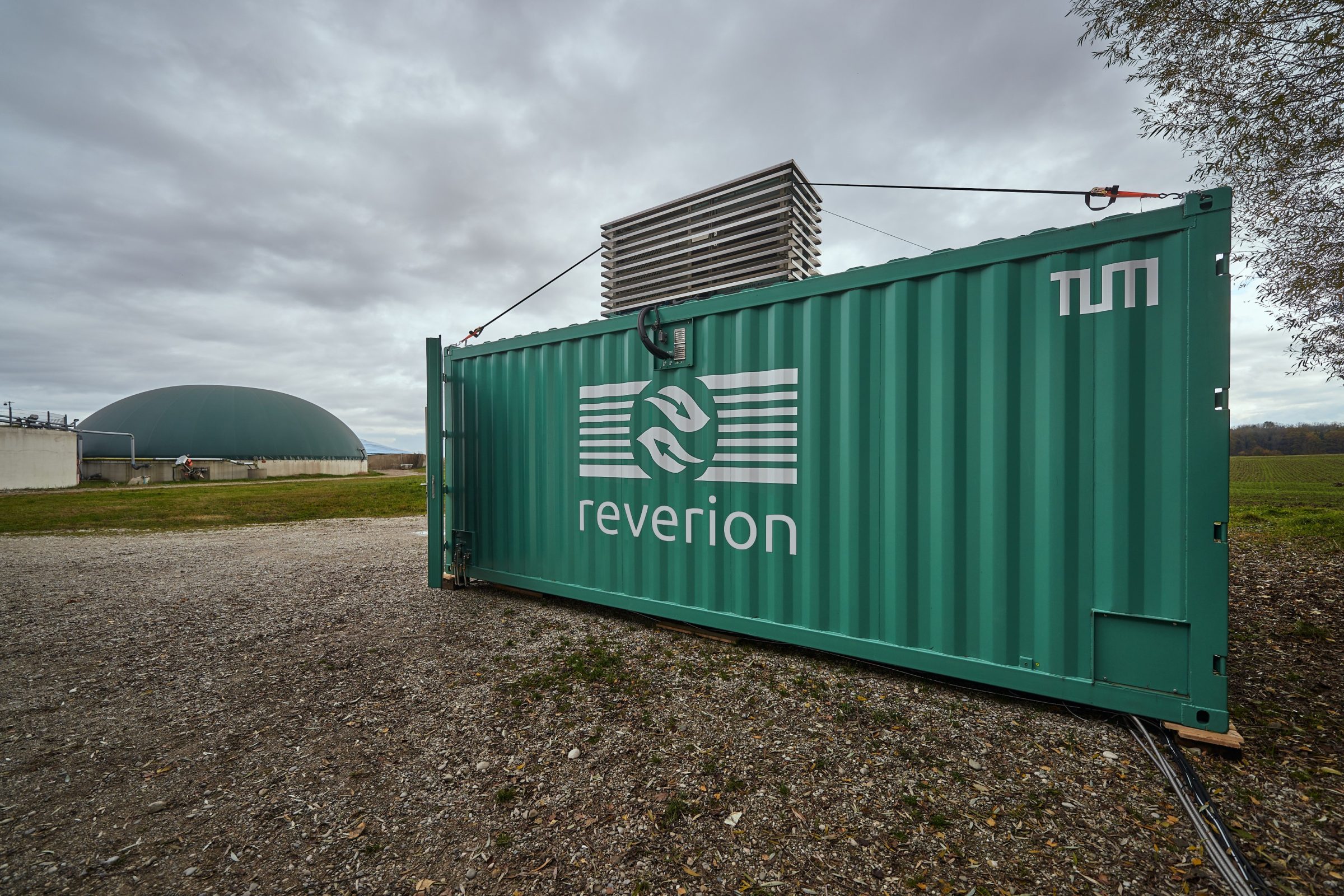 Biogas can solve our energy crisis

Reverion, Extantia’s most recent investment, is here to lead the transition with its game-changing technology that doubles the efficiency of existing biogas plants and can produce more timely-needed baseload energy.

Biogas instead of Russian gas

With the current geopolitical situation in Europe aggravating, the sense of urgency around the energy crisis is intensifying. Politicians, policymakers, and climate advocates have been asking themselves how to solve Europe’s energy problem, while at the same time continuing the transition to net zero using renewable energy.

To understand the challenge, let’s look first at the numbers in Germany. Germany uses natural gas for 27% of its primary energy consumption. 95% of that gas is imported and 55% of the imported gas comes from Russia. This means that 15% of Germany’s total primary energy consumption needs rely on Russian natural gas. Germany also imports oil and coal from Russia, but in this article, we will focus on the gas needs. 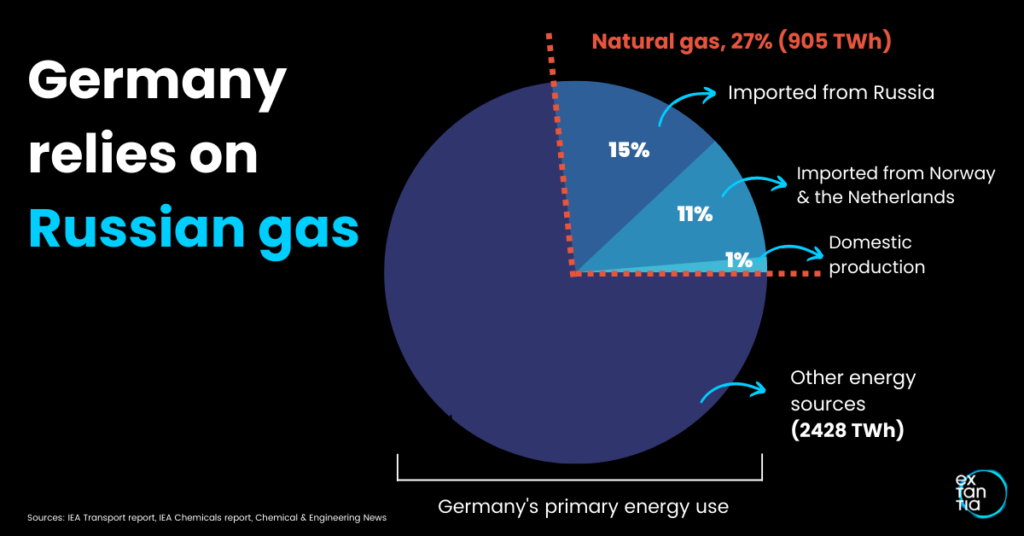 There are multiple solutions for this issue, and biogas emerges as a strong candidate. At the moment, the German biogas capacity could cover only 22% of the Russian gas. With Reverion’s technology, however, that percentage can be ramped up to 44% without any additional land use. 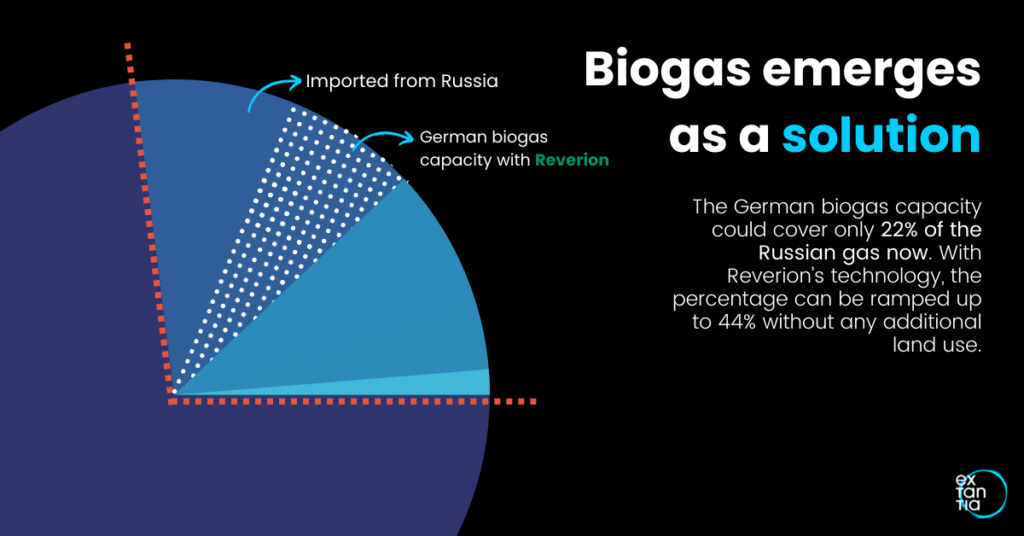 With sufficient funding and the right partnerships, this can be done in a relatively short amount of time (a few years), as the technology is already relatively mature — Technology Readiness Level (TRL) 7.

Taking a step back, what is biogas? And why is biogas a great alternative to fossil fuels? Here are some basics about it.

When organic waste — think crops residue, manure, etc. — is decomposed in the absence of oxygen (an anaerobic process), a mixture of methane, carbon dioxide, water, and hydrogen sulphide is released. These gases together are known as biogas. Biogas can be used either directly for cooking and lighting or it can be transformed into any kind of thermal, electrical, or mechanical energy, and then be used for electricity production using an engine or a turbine. Biogas has been used as a power source for more than 150 years as it provides weather-independent, resilient, and predictable energy (also known as baseload energy).

Biogas today accounts for just 0.3% of total global primary energy. But don’t be misled by the small share. Biogas will play a significant role in the overall decarbonisation of the energy system. The baseload nature of biogas can enhance the flexible operation of power systems, compensating for the intermittency of wind and solar, while replacing natural gas and coal. Another big advantage of biogas is its local nature. Biogas is produced close to the point of consumption. Therefore, it doesn’t require a complex transportation grid and can offer communities and municipalities a sustainable source of power and heat independent of any geopolitical developments.

Doubling down on biogas

In Germany, there is today about 6.5 GW of installed electricity capacity of biogas plants. Yet, last year those plants produced only 27,000 GWh of electricity, which is less than 50% of the full production potential. The main reason is that most plants use combustion engines or turbines to transform the gas into electricity. This process has a low conversion efficiency of 30-40%, which means that most of the energy of the gas is not converted to electricity but rather wasted as heat. In some cases, a combined heat and power (CHP) process will utilise the heat and increase the overall efficiency.

This is where Reverion comes into the picture. As a spin-off from the Technical University of Munich, Reverion’s technology enables electricity generation from biogas with unprecedented efficiency of 80%. This optimisation is made possible using a plug-in solution that easily replaces the old combustion engine with a special fuel cell in a novel system design. The upgraded system now has double the electricity production capacity compared to the current system. No other changes to the system are needed. Plug and play!

And it gets even better. The fuel cell can operate in reverse mode. This means that while conventional biogas plants have so far only acted as electricity producers, a Reverion plant can directly reverse electricity production into electricity consumption. Thus, it uses excess electricity from wind and solar for an electrolysis process in which either green hydrogen or renewable methane can be produced. The latter can even be re-injected into the current gas grid and thereby contribute to natural gas substitution.

Reverion systems are therefore ideally suited to both stabilise the power grid and store energy seasonally. Exactly what Germany currently needs. The company has been recognised for its innovative solution and won the Student XPRIZE Carbon Removal Challenge in addition to several other national and European prizes.

Reverion is EPIC – How the carbon math adds up

Similar to other renewable energy sources, biogas plants also have a carbon footprint. This is caused mostly by burning natural gas in the combustion engine. The Reverion process eliminates these emissions and captures the CO2. In this way, biogas becomes a totally carbon-negative energy source reducing the carbon intensity from 105-230 g CO2e/kWh to around (negative) -420 g CO2e/kWh.

If we add up the numbers according to our Extantia Projected Impact Calculation (EPIC) methodology, Reverion’s technology easily passes Extantia’s 100 Mt CO2e savings per year threshold. More on that in our next article.

In times of energy crisis, we are excited to partner with Reverion. Their technology can be scaled now and make a real contribution to solving the complex geopolitical situation in the energy market.

By Yair Reem, Iris ten Have, and Fernanda Bartels